Michael Bane was kind enough to mention this article on Glock braces in this week’s episode of Triggered. I gotta admit, one of the reasons why I wrote that article is because I am halfway obsessed with the idea of a PDW, or Personal Defense Weapon. These are the guns that don’t have the range or punch of even a smaller rifle cartridge like the 5.56mm, but bring more to the table than just a pistol can bring.

In fact, if I ever get copious amounts of free time, I’d probably do a book on them, a la Ian’s book on French battle rifles or something similar.

I can vividly recall doing research for a Top Secret campaign I was running (the role-playing game, not the movie), and coming across info on the Vz 61 Skorpion. A pistol-sized gun with a stock that was full auto? What’s not to love?

I was hooked, and PDWs became my obsession.

So it’s not surprising that my “road gun” is a PDW-sized gun. I use a Gen 4 Glock 19 in a Recover Tactical Stabilizer. I found in my testing for the article that it gave me the best balance of size between the Roni MCK and the Flux Defense brace, plus the length of pull on the brace is enough that I can get a good sight picture when using a dot.

To get an even better sight picture, I use Raven Concealment’s version of the Dueck Defense mount. That way the dot clears the side of the chassis and doesn’t require me to mill the slide to mount a sight.

The more I work with this thing, the more I like it. Going six for six on a plate rack at 25 yards is a breeze, and it uses the same mags as my carry Glock 19. A Magul 21 rounder inside of magwell on the Recover Tactical gun is the same height as a 15 round G19 mag in the front. That gives me (does math in head) 66 rounds of 147 gr Federal HST to handle things, and if that’s not enough, I can easily slide in a 33 round stick into the Hazard 4 sling pack I use carry the brace in. 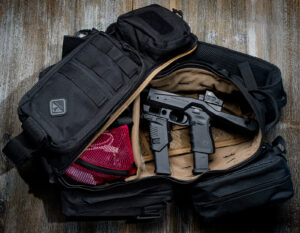 In addition to this, the, ah, mag holder (winkwinknudgenudge) up front will hold the halves of the stabilizer together by itself. This means I can quickly remove the mag holder, open the stabilizer and remove my gun, effectively giving me a backup to the Glock 19 that I already carry.

As an added bonus, a Streamlight TLR-7 fits on the rail and snugs up against the brace like it’s meant to go there, giving me a decent little weapon-mounted light, something that is right handy in a home defense gun.

Even if I only need this gun for when I’m away from home.