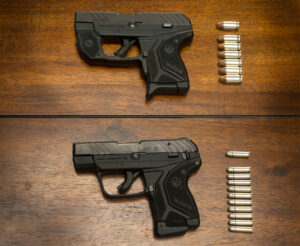 I just got back from my first range session with the Ruger LCP LiteRack. It’s a ten shot, 22LR version of their very popular LCP2 pistol that’s usually chambered in 380 ACP. The switch to 22, however, turns it into a completely different gun.

The LCP in 22LR has no recoil. I don’t mean “controllable” recoil, I don’t mean “brisk, but manageable,” I mean none, or at least whatever recoil there is has no significant effect on sight movement. It was… amazing. I laughed out loud after sending my first mag downrange with this gun.

I sorta specialize in carrying pocket guns and writing about them, doing articles on them for Shooting Illustrated, Lucky Gunner and Ammoman. I carried a pocket gun for over a decade because it was the easiest way I found for me to have a sidearm on me in a office environment.

I didn’t just carry my gun, I practiced with it regularly. I learned that 10 yards was pushing things with my gun, and that 15 yard encounters were pretty much theoretical. I learned that a one-second draw was very doable if I could get a hand on my gun in my pocket first. What I learned most of all, though, is that a gun the size of a chocolate chip cook kicks, even when loaded in 380ACP.

This is not true, however, if it’s loaded with 22LR. The 22 LCP is FUN to shoot. It’s still has the same minuscule size and awful sights of the 380ACP, which means that it’s also a 10 yard gun at best. However, within that range, it is a lot easier to shoot than it’s 380ACP cousin.

I’ll need to do more testing with the gun before this gun will replace my beloved LCP2 (including gel tests of Federal’s very intriguing Punch ammo), but at the very least, this little gun will give me a way to keep practicing my pocket gun technique, without paying a lot out of pocket for practice ammo.