I love my CZs, I own… a bunch of their guns, but let’s face it, they are at least 5 years behind the market. Hammer-fired actions are starting to make a comeback as America get older. The slide on a hammer-fired action tends to be easier to manipulate than on a striker-fired gun, and the trigger on a single-action only gun is going to be better than any DAO/striker gun out there. Both of these features are great for the older set, hence the popularity of S&W ShieldEZ series and the Ruger Security 9.

Which, you would think, makes CZ ideally suited for his market. The CZ75 is pretty much king of the hill in USPSA Production for those very same reasons, which means they can easily convert all that knowledge into something that’s ideally suited for the U.S. concealed carry market. 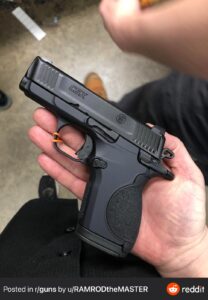 In the mean time, Smith and Wesson is hard at work, capitalizing on one of their most iconic brand names is developing stuff like this, the prototype CSX that was recently “accidentally” sent to a gun shop.

This looks like it trips all the boxes for what people want in a self-defense gun right now, plus it’s got a brand affiliation that goes back for decades. This is the gun that CZ should have rolled out four years ago, but instead, they’re playing catch-up, like they normally do.

Get it together guys. You make great guns. Stop skating to where the puck was, and start to look ahead a bit.