It occurred to me that I haven’t done a pocket dump / EDC post in quite awhile. These are a double-edged sword. One the one hand, it can be interesting to see how other people are solving life’s little problems. On the other hand, nobody cares about your junk.

However, for me, they’re an interesting documentation on how my thinking on personal defense has progressed over the years. I’m blessed in that I haven’t made a lot of really stupid mistakes. The worst I probably point to is carrying a Sccy 9mm (which can be a decent little cheap gun) and a reliance on hybrid holsters when I was first starting out. No micro compacts in .40 S&W, no derringers as backup guns or anything really questionable choices. 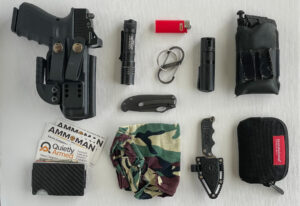 Instead, I’ve been realizing that there are two types of gear that I carry: The gear I have that makes my life better, and the gear I carry to make sure my life can continue. A flashlight, a folding knife and a lighter are some of the things I carry to make my life better. The fact that they can also save my life in unusual circumstances is just icing on the cake.

The gear I carry to make sure my life continues is things like my pistol, fixed blade knife and tourniquet. They are not meant for day in, day out use. If those come out, it means they are needed and they are needed RIGHT NOW.

With that in mind, let’s look at what’s usually on me, starting at the top left and going clockwise.

Glock 19 with a Swampfox red dot in a Dark Star Gear Orion holster. Loops are more comfortable for me that clips, and I added a foam pad to give me better concealment. It’s loaded with 147gr HSTs. I’ve taken to carrying a spare magazine with me as well these days, just in case.
A Streamlight ProTac 1L-AA flashlight. Enough candela for the distances that I encounter in my daily routine, small enough to carry with everyday.
Bic disposable lighter. Because birthday parties and barbecues and other things happen.
Caliper and split ring. More on these in a little bit.
POM pepper spray. The best pepper spray for armed civilians, bar none. Buy a couple, and buy some trainer versions as well.
An SOF-T tourniquet in a Blue Force Gear Ten Speed M4 mag pouch. I can’t stand ankle medical kits, and even if I could, I wear shorts 300 days a year. This setup allows me to carry a TQ on my belt, right behind my spare mag.
Pocket Trauma Kit. Inspired by a Paul Gomez video. Inside are gloves, four feet of duct tape, two small Celox packets and a cravat bandage in a plastic bag. The cravat can be used with the caliper and split ring to improvise a TQ, and the plastic wrap and duct tape can make an improvised chest seal. Is it an IFAK? No. Can I carry this literally anywhere, including onto planes and other non-permissive environments? Yes.
SOG Mini Instinct. I carry this on the centerline, and it is for defensive purposes only. I’ve tried a TDI, I’ve tried a Clinch Pick, and I keep coming back to this knife.
A handkerchief. Look, just carry one with you. Always. They can do so many things, and they’re pretty much universally ignored.
CRKT Pazoda. This is the knife I hand to people if there’s a box to be opened or something similar. It does the job, and it’s cheap enough that I’m not on death’s doorstep if I lose it.
Wallet and cards. If you’re in a position where you need to have business cards, and they’re not on you 24/7, you’re doing it wrong.